Kaleya Harris is from southeast Georgia. She earned her B.A. in Criminal Justice from Armstrong State University in Savannah, GA. During her time in Savannah, she worked in the Administrative Division of the U.S. Attorney’s Office, Southern District of Georgia. It was her experience working there that fostered her lifelong desire to become a lawyer.

While still a law student, Ms. Harris worked as a law clerk for the U.S. Attorney’s Office, Middle District of Louisiana. She served as an SULC teaching assistant for both criminal law and legal writing. She volunteered with the Baton Rouge Bar Association’s Junior Partner Associates, where she worked with local elementary school students on what it means to be a lawyer. She is a member of the SULC Chapter of the American Inns of Court.

Ms. Harris received her J.D. from Southern University Law Center in May 2016. She is presently a Graduate Intern with the Legislative Drafting Institute for Child Protection. Upon completing her internship, she plans to continue her work in legislative drafting. She also hopes someday to revisit her roots with the federal prosecutor’s office.

Devrek Comager-Lain is from Baton Rouge, Louisiana. He earned his B.A. in Sociology from Southeastern Louisiana University in 2013.

Mr. Comager-Lain’s interest in legislation started when he served as a Legislative Intern for New Orleans Sewerage & Water Board during the 2015 Legislative Session for Louisiana. He recently authored a research paper about Baton Rouge’s public transportation system, and has drafted model legislation to improve the efficiency of Baton Rouge’s bus system.

Mr. Comager-Lain is in his final year at Southern University Law Center. He is presently a Student Intern with the Legislative Drafting Institute for Child Protection, where he will work with student researchers to edit their work and to ensure the legislative methodology is followed. He aspires to a career in legislation and policy.

Theodore Knatt, Jr. is from Baton Rouge, Louisiana. His family is originally from Loreauville, Louisiana. He earned his B.A. in History and Political Science from Southeastern Louisiana University. At Southeastern, Mr. Knatt received honors on the Dean’s list, the President’s list, and the Southeastern Honor Roll.

Mr. Knatt is in his final year at Southern University Law Center, where he has received Dean’s list honors. He interned with a government relations firm during the 2016 Louisiana legislative session. He is presently a Student Intern with the Legislative Drafting Institute for Child Protection, where he will work with student researchers to edit their work and to ensure the legislative methodology is followed. He has a strong interest in tort law, legislative drafting, and government relations.

Louis D. Brooks is from Seattle, Washington. While in high school, Mr. Brooks was invited to intern for U.S. Prosecutor Kelly Harris. After completing his internship, Mr. Brooks was hired as a student clerk by the Seattle District Attorney, the youngest ever hired by that office.

Mr. Brooks is a second-year student at Southern University Law Center. He aspires to a career in politics and contract law.

Georgeann McNicholas is from St. Thomas, Virgin Islands. She earned a B.S. in Legal Studies from the University of Maryland. She is a certified paralegal (CP/CLA) and a member of the National Association of Legal Assistants. She is also a certified Anti-Money Laundering Specialist.

Ms. McNicholas has worked in the legal field for more than thirty years. She worked in the public sector as a legal secretary and office manager for the County Attorney’s Office in Kerr County, Texas. In the private sector, she was Legal Administrator and Compliance Officer for Globalvest Management Company in St. Thomas, Virgin Islands, and Chief Compliance Officer for Stanford Global Advisory in St. Croix, Virgin Islands.

From 2009 to 2013, Ms. McNicholas was the owner of Pavé Street, Incorporated. She incorporated and organized companies in onshore and offshore domiciles and helped maintain their local and federal regulatory requirements. She provided regulatory compliance oversight for Economic Development Commission beneficiaries and for the U.S. Securities and Exchange Commission (SEC) registered investment advisors. Ms. McNicholas is Executive Secretary to the Louisiana Board of Professional Geoscientists, where she manages the certification program for geoscientist-in-training and the licensing of geoscientists working in Louisiana.

Ms. McNicholas is in her final year at Southern University Law Center. After graduation, she plans to establish an elder law practice, focusing on legal issues affecting older Americans and their families.

Tara Melancon is from Prairieville, Louisiana. She earned her B.S. in Animal, Dairy, and Poultry Science from Louisiana State University, where she was named to both the Dean’s List and the Chancellor’s List.

Before attending law school, Ms. Melancon worked as a legal assistant for a criminal defense attorney, and as a Sergeant with the Louisiana Department of Corrections. She is a licensed notary public.

Ms. Melancon is a second-year law student at Southern University Law Center and was named to the Dean’s List for the Fall 2015 semester. She has a strong interest in civil rights law.

Matthew L. Sandifer is from Alexandria, Louisiana. He enlisted in the United States Marine Corps at the age of 19, where he completed four years of service with two combat deployments to the city of Ramadi in the Al Anabar Province of Iraq, serving as a provisional rifleman, machine gunner, and artilleryman. He was awarded the Distinguished Certificate of Commendation for outstanding service with combat operations, the combat action ribbon, the Iraqi Service Medal, and the Certificate of Exemplary Service from the Eleventh Marine Corps Regiment.

Upon completion of his enlistment, Mr. Sandifer attended Louisiana State University at Alexandria and earned two B.A. degrees: one in Criminal Justice, with a minor in speech communication studies; the second, in Political Science. He served as Student Chairman for the university’s Veterans Service Committee, where he facilitated LSUA’s recognition in GI Jobs Magazine as a certified “Veteran Friendly” campus. He was President of LSUA’s Environmental Green Team, as well as a member of the Student Government Association and the Gamma Beta Phi Honors Society. Mr. Sandifer served with the Pro Bono Clinic of Louisiana’s 19th Judicial District Court, helping others gain access to legal assistance.

Mr. Sandifer is a second-year law student at Southern University Law Center. After graduation, he plans to work in health care law. He also hopes to start a nonprofit organization to assist other veterans with their benefits, as well as with issues involving Post-Traumatic Stress Disorder.

Rachel Svetlecic Young is from New Orleans, Louisiana. She has traveled to and lived in diverse cultures ranging from cities such as Tokyo and New York, to rural farm towns like Winnsboro, Louisiana, where her grandfather started a small lumber company after emigrating from Yugoslavia. Ms. Svetlecic Young is fluent in Spanish and skipped a grade in high school after taking the Spanish proficiency test. At age 15, she received a scholarship for placing first in the Louisiana State Literary Rally competition.

Ms. Svetlecic Young earned her B.S. in Agriculture from Louisiana State University. She has worked in the fitness and fashion industries, building client relationships for companies such as BCBG Max Azria, Urban Talent Management, and Women’s Health Magazine.

Ms. Svetlecic Young is a second-year law student at Southern University Law Center. She hopes to use her experience and love for Louisiana to serve its people as a lawyer and advocate for troubled youth.

Vanessa F. Flores lives in New Orleans. After living in Mexico for eleven years, she attended the University of New Orleans where she earned her B.A. and M.A. in History. She published her thesis, Black Police in Jim Crow New Orleans.

Before attending law school, Ms. Flores was a Spanish and elementary school teacher. She worked as a legal assistant for immigration law firm where she supported the firm’s Spanish-speaking clients. She owns a small business that provides translating and interpreting services in legal, medical, and business matters.

Ms. Flores is a first-year law student at Southern University Law Center. She aspires to a career in immigration law and hopes to help the growing migrant community in Louisiana.

Rhea Franklin Davis is from Lake Charles, Louisiana. Upon graduating high school with honors, she was accepted into the Summer Scholars Program at Louisiana State University. She earned her B.A. in Criminology in just three years.

Ms. Davis went on to receive her Peace Officer Certification when she graduated from the police academy in 2004. Since then, she has worked in law enforcement as a police officer, a deputy constable, and as a probation and parole officer. She was named as Deputy of the Year in 2013 for outstanding public service and integrity.

Wanting to work on a different facet of the law, Ms. Davis enrolled in law school. She is a second-year law student at Southern University Law Center. She received the CALI award in Legal Writing I, and completed her first year after making the Dean’s List in both Fall and Spring semesters.

Jennifer Winkler is a native of Baton Rouge, Louisiana. She earned her B.A. in Mass Communication from Louisiana State University, where she is also a Fellow of LSU’s Academy of Politics. Before beginning law school, Jennifer worked in public and media relations for clients in the oil and gas industry and for several non-profit organizations.

Ms. Winkler is a second-year law student at Southern University Law Center. She completed her first year after making the Dean’s List in both Fall and Spring semesters. She was recently elected to serve Treasurer for the Christians at Law at SULC.

Ms. Winkler hopes to combine her passion for writing with her legal education to pursue a career with the Louisiana legislature and to focus on the needs of communities with social and economic disparities. 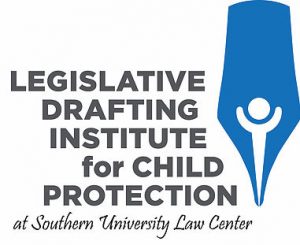 About Us Mission Statement About Our Logo LDICP Team LDICP Board